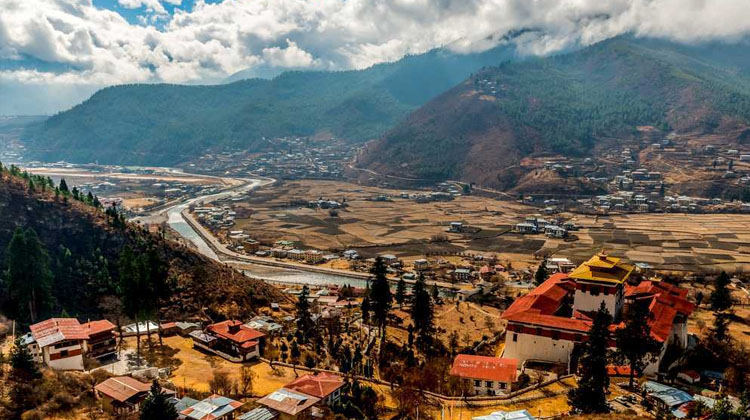 When life gives you lemons, make lemonade! When you crave for a vacation, take it.For the explorer who is looking for balance, who needs to find out about culture and history, who needs to profit with flawless nature, for that voyager, we fostered a spot: a safe-haven. Where you can discover the harmony to relinquish the every day absurdity, discover balance between body, brain and soul, and experience the pith of Bhutan.

Our representative will meet you the Paro Airport, following which he’ll take you to the capital city of Bhutan, Thimphu (7,710 ft.). Enveloped in nature’s arm, this city is amazingly beautiful. On your way to the hotel, you’ll spot high mountain ranges, thick vegetation cover and glimpses of local life. After you check in to your rooms, freshen up, grab a bite and later rest for some time. Once you have restored your energy take an evening stroll and explore the nearby areas of your hotel. Get back, have your dinner followed by a sound sleep.

Have a sumptuous meal and head towards your first destination of the day, Kuensel Phodrang which is known for its huge Buddha Statue. The statue holds a sacred place in the hearts of Bhutanese people. Spend some time admiring its grandeur and then make a move to the National Memorial Chorten (Monument) & Folk Heritage Museum. Another religious Monument for the citizens of Bhutan is the Chorten Memorial which also is the symbol of world peace. Up next is the Folk Heritage Museum, a three-storied building, known for preserving the traditional Bhutanese culture. On the completion of all these 3 attractions, have your lunch and then visit Sangaygang View Point, a spot full of Tibetan flags and mind-boggling views. High above the town where the road branches off from the city boundaries comes this picturesque point. The valley is worth every view you get from here. Post the sunset, it becomes a lovers’ lane.

It’s your third day in Bhutan and the day calls for some good exploration. Grab a good amount of breakfast, buckle up your shoes and make a move towards Simtokha Dzong. The next location for the day is Jungshi Handmade paper factory. Here you’ll learn about the methods of producing Deh-Sho, the traditional Bhutanese paper. Visitors are allowed to see the age-old methods that locals have been using in processing this paper. If given a chance to take part in the process, please do and create some souvenir for yourself. After trying your hands on creativity make your way to other attractions like Drupthob Lhakhang and many more.

Start your day with heavy breakfast as the day calls for a lot of travelling. Today you’ll be heading towards Punakha/Wangdue while taking a pit stop at Dochu-La-Pass (3150 mts.) in between. The spot gives you some spectacular Himalayan views, hence the place is worth stopping at. Now, resume your journey towards Punakha Dzong which was built in 1637 by Zhabdrung Ngawang Namgyal. It served as the Government seat for years until the second king came into power. The Dzong was previously named as Druk Pungthang Dechen Phodrang which also means the Palace of Great Happiness. After you are done with exploring the Dzong take a short hike towards Chhimi Lhakhang or the Temple of Fertility. It is one of the most renowned religious places in Bhutan and is frequently visited by several devotees. Travellers from around the world flock here to witness the unusual cultural and traditional ceremonies.

Today we’ll be moving towards Paro, yet another beautiful gem in Bhutan. On your way visit Tamchog Lhakhang which is situated between Thimphu and Paro. It was built in the 13th century by Thangthong Gyalpo who is also known as the Iron bridge builder. Located atop the hill, you need to cross an ancient architectural styled bridge to reach this temple. Crossing the years old chain bridge and its undulating movements is indeed an undulating experience. The river beneath looks no less magnificent as the hills around. After this continue your journey to Paro. On reaching Paro, check in at your hotel, rest for some time and then head out for Ta Dzong – National Museum, having an excellent collection of relics, arts and religious thangkha, etc. overnight stay in Paro.

Today is officially the last night in Bhutan. Leaving behind the laziness, get ready, have your delicious breakfast and leave for the very famous Taktsang Monastery – called “Tiger’s Nest” (2hrs hike from the base camp). One of the most picturesque monasteries in the world, this monastery is where ‘Second Buddha’ or Guru Riponche is believed to have meditated in order to subdue his inner demons. Legend states that he flew to the cave while sitting on the back of a tigress. Not only does the monastery has a great history but it also offers some astounding views of the surrounding valleys.

Later visit Drukgyel Dzong & Kyichu Monastery. Once a fortress the former now can be found in ruins, located at the upper parts of Paro. According to information, it was built in 1649 by Tenzin Drukdra.

It’s time to bid Bhutan a goodbye with a hope to return soon! Relish your last breakfast here, check out from the hotel and now you are headed out for Paro Airport. Only Rs.7,999/-
Singapore-Travel in Style
Popular